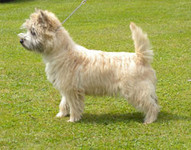 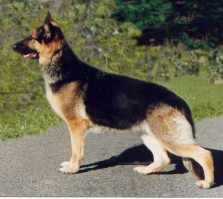 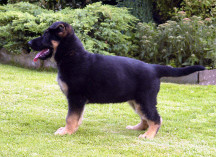 © The Kennel Club - Unauthorised Reproduction of Text and Images Prohibited.

A Breed Standard is the guideline which describes the ideal characteristics, temperament and appearance of a breed and ensures that the breed is fit for function. Absolute soundness is essential. Breeders and judges should at all times be careful to avoid obvious conditions or exaggerations which would be detrimental in any way to the health, welfare or soundness of this breed. From time to time certain conditions or exaggerations may be considered to have the potential to affect dogs in some breeds adversely, and judges and breeders are requested to refer to the Kennel Club website for details of any such current issues. If a feature or quality is desirable it should only be present in the right measure.

Forequarters
Shoulder blade and upper arms are equal in length, well muscled and firmly attached to the body. Shoulder blades set obliquely (approximately 45 degrees) laid flat to body. Upper arm strong, well muscled, joining shoulder blade at approximately 90 degrees. Seen from all sides, the forearms are straight and, seen from the front, absolutely parallel. Bone oval rather than round. The elbows must turn neither in nor out while standing or moving. Pasterns firm, supple, with a slight forward slope. An over long, weak pastern, which would affect a dog's working ability is to be heavily penalised.  Length of foreleg slightly exceeds the depth of chest.

Body
Length measured from point of shoulder to point of buttock, slightly exceeding height at withers. Correct ratio 10 to 9 or 8 and a half. Undersized dogs, stunted growth, high-legged dogs, those too heavy or too light in build, over-loaded fronts, too short overall appearance, any feature detracting from reach or endurance of gait, undesirable. Chest deep (45-48 per cent) of height at shoulder, not too broad, brisket long, well developed. Ribs well formed and long; neither barrel-shaped nor too flat; allowing free movement of elbows when gaiting. Relatively short loin. Belly firm, only slightly drawn up. Back between withers and croup, straight, strongly developed, not too long. Overall length achieved by correct angle of well laid shoulders, correct length of croup and hindquarters.  The topline runs without any visible break from the set on of the neck, over the well defined withers, falling away slightly in a straight line to the gently sloping croup.  The back is firm, strong and well muscled. Loin broad, strong, well muscled. Weak, soft and roach backs undesirable and should be heavily penalised.  Croup slightly sloping and without any break in the topline, merges imperceptibly with the set on of the tail. Short, steep or flat croups highly undesirable.

Hindquarters
Overall strong, broad and well muscled, enabling effortless forward propulsion. Upper and lower thigh are approximately of equal length. Hind angulation sufficient if imaginary line dropped from point of buttocks cuts through lower thigh just in front of hock, continuing down slightly in front of hindfeet. Angulations corresponding approximately with front angulation, without over-angulation.  Seen from rear, the hind legs are straight and parallel to each other. The hocks are strong and firm.  The rear pasterns are vertical.  Any tendency towards over-angulation of hindquarters, weak hocks, cow hocks or sickle hooks, is to be heavily penalised as this reduces firmness and endurance in movement.

Gait/Movement
Sequence of step follows diagonal pattern, moving foreleg and opposite hindleg forward simultaneously; hindfoot thrust forward to midpoint of body and having equally long reach with forefeet without any noticeable change in backline.  Absolute soundness of movement essential.

Coat
Outer coat consisting of straight, hard, close-lying hair as dense as possible; thick undercoat. Hair on head, ears, front of legs, paws and toes short; on back, longer and thicker; in some males forming slight ruff. Hair longer on back of legs as far down as pasterns and stifles and forming fairly thick trousers on hindquarters. No hard and fast rule for length of hair; mole-type coats undesirable.

Colour
Black or black saddle with tan, or gold to light grey markings. All black, all grey, with lighter or brown markings referred to as Sables. Nose black. Light markings on chest or very pale colour on inside of legs permissible but undesirable, as are whitish nails, red-tipped tails or wishy-washy faded colours defined as lacking in pigmentation. Blues, livers, albinos, whites (i.e. almost pure white dogs with black noses) and near whites highly undesirable. Undercoat, except in all black dogs, usually grey or fawn. Colour in itself is of secondary importance having no effect on character or fitness for work. Final colour of a young dog only ascertained when outer coat has developed.

Faults
Any departure from the foregoing points should be considered a fault and the seriousness with which the fault should be regarded should be in exact proportion to its degree and its effect upon the health and welfare of the dog.